The plot of Ready Player One, based on the highly praised but post-Gamergate increasingly "problematic" book by Ernest Cline, is straightforward enough: in 2045 Columbus, Ohio, average-white-boy Wade Watts is trying to find the golden Easter Egg in "The OASIS," a virtual reality universe created by the Willy Wonka-like James Halliday (Mark Rylance), who upon his death revealed that whoever won his "game" (which involves dissecting Halliday's life for clues and knowing a lot of 80s trivia) would inherit control of his creation. We follow Wade's quest (his VR name is the Arthurian-inspired "Parzival") in which he and his friends must face off against greedy Corporate Power to win Halliday's game and the unbelievable real-world power to go with it.

The game involves the completion of three quests to win three keys (and finally, in an alchemical touch, unlock the Golden Easter Egg), and each quest, somewhat surprisingly, is a descent into increasing horror. The first -- a MarioKart-like race through VR New York to VR Central Park -- is an Inferno-like beginning. As in Dante's poem, the path is blocked by various beasts (a T-Rex from Jurassic Park, King Kong), and it takes the advice from the Virgil-like Halliday (via his curated life records), to cue Wade in to starting the race by going backwards (into past-ness), which causes him to descend beneath the obstacles, into Hell, and on the occult path to winning the first Key. 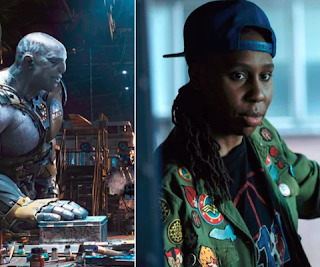 The OASIS is populated by the characters and cultural artifacts of Halliday's 80s childhood, a culture preserved in virtual formaldehyde, unchanging, referencing, repeating, like Dante's trapped souls, the same actions, words, and famous fiery moments over and over in an accursed state of stunted nostalgia.  There is little to like in the protagonist -- Wade Watts's OASIS-obsessed character, is naive, escapist, bumbling and self-centered, in contrast to his "Beatrice," the reality-centered and goal-oriented Samantha (VR Artemis), who is playing to win the game to fight the evil corporation that killed her father. Wade's good friend in the OASIS, "H," who appears masculine in VR, is later (Spoiler!) revealed to be played by Lena Waithe in "real" life, representing at least a nudge toward diversity, a little stab at a wider perspective by the filmmaker. And yet. 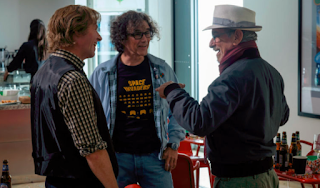 While the film is certainly enjoyable, it is also problematic in several ways, stemming mostly from the source material. Still, the difference between it being an ugly onslaught of empty references or a fascinating game to play (or rabbit hole to fall into) for the viewer depends on whether one thinks of Spielberg as a crafty but shallow man telling sentimental stories, or someone -- like his friend and major influence Stanley Kubrick -- who encodes hidden messages, or easter eggs, in his films, in order to communicate on several levels (something, not incidentally, the video-game creators referenced in the film do as well). I've long seen Spielberg as a message-sender, albeit a much more intuitive one than the more intellectual control-freak Kubrick.  I think he generally knows that he is an instinctive communicator, is capable of subtlety, and understands that he creates many meanings he might not be aware of while filming them. Even as crew members inserted their own references in post-production against the director's wishes, it still appears here that Spielberg is communicating on a multitude of levels, and is, like Halliday, semi-conscious of his limitations and reaching out for successors, too.  At the end, when (Spoiler!) whitebread Wade "wins" the game and control of the Oasis, he declares that power will be shared among his diverse array of friends, a self-aware baton-pass from loyal neoliberal Spielberg (that's a joke) to a future culture created by a chorus of voices, at last overtaking the long-strained solo of the straight white male.  And yet...


Early on in the story, in a piece that is apparently not in the novel, we learn that the Spielberg-character, OASIS creator James Halliday, had a favorite quote, from the movie Superman. And in one of our first clues that Spielberg (via Halliday) is grappling with the evil inherent in their massive cultural creations, that quote is supervillain Lex Luther's: "Some people can read War and Peace and come away thinking it's a simple adventure story. Others can read the ingredients on a chewing gum wrapper and unlock the secrets of the universe." 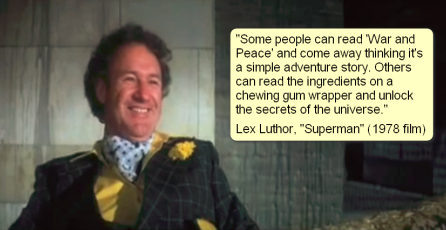 Steven Spielberg -- who once made his War and Peace and his greatest bubble gum pop adventure in the same year (the Oscar-dominating Schindler's List and theme park ride generating Jurassic Park in 1993), can already predict that the naysayers will call Ready Player One a pile of empty references, a pop creation (made from the cultural equivalent of ingredients on a bubble gum wrapper), and he is insulting them for being dense. He is also inviting others to pay attention and to look for meaning where others see a showman's spectacle.

Dana Steven's Slate podcast spoiler reviewers seemed bewildered as to why Steven Spielberg -- a man with a towering legacy who could choose to work on anything (or nothing at all) -- would choose this "problematic" and "trivial" boys-club story to adapt to film.  I think -- how could he not? Here is the 80s culture he shaped and dominated, the blockbuster, teenager-exulting decades he ushered in, and the childhoods of much of the viewing audience, smashed together in what Dana correctly calls an ugly VR smorgasboard.  And yet, buried in all this cultural detritus are characters children were devoted to, countless quests taken by countless heroes, a variety of games and stories in an otherwise mythologically deficient society through which an entire generation struggled to come of age. Spielberg shoves it together and asks us to look at what he has -- what we all have -- wrought. Indeed, any indictment of he who dominates the culture is by extension an indictment of all of us who let it happen. 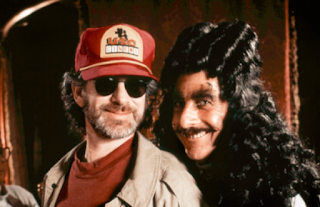 Spielberg, the child actor-whisperer, made Hook (about a grown-up Peter Pan) because he identified with the story: "I've always been Peter Pan. That's why I wanted to do this movie. In a way it's typecasting for me, because I've always felt a great affinity for the character." It seems obvious, then, that for Spielberg, the appeal of Ready Player One was Mark Rylance's character, James Halliday/VR wizard-hermit Anorak, who pointedly, in his last scene, shows Wade his childhood self he "keeps around"  to help him "remember." Spielberg is a filmmaker largely concerned with childhood, and who has created worlds for children to become lost (lost boys) in -- worlds of make-believe some are still lost in, like a labyrinth, as adults.  Of course he would identify with James Halliday, and through Halliday, explore the consequences of his creations, and the agonies and ecstasies of the Creator-type in general. 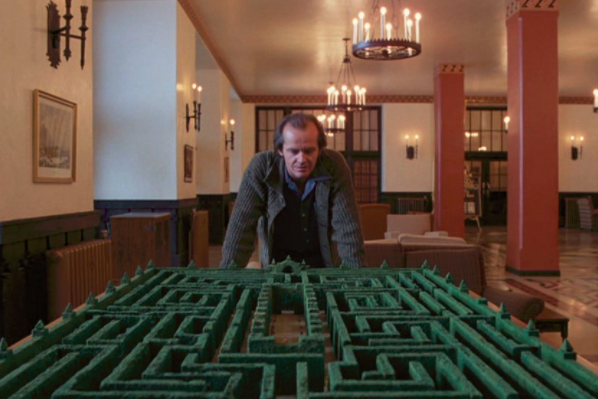 If the first of the "key" quests is a descent into Hell, and the last quest is a trip (Planet Doom!) to Hell's inner circles to face the corporate satan, the middle key quest -- which Spielberg changes entirely from the book (a re-creation of War Games) to a re-creation of The Shining -- is by far the most fascinating, as well as the most entertaining sequence of the movie. The re-creation of the setting of the most closely analyzed horror film ever made is a stunning choice, and perfect for the violent middle circles of this virtual Inferno. Yet on one level, it is a travesty -- he takes a meticulous, subtle, and chilling horror film and turns it into a vulgar video game, like the popular Shining mod for Duke Nukem 3D.  But on another, he is inviting us to read into his film, perhaps somewhat insecurely, like obsessives have read into Kubrick. He even sets much of the action in the famous "Room 237," the title of the popular documentary about a group of fans' intricate and (to many) crazy-sounding interpretations of the details in The Shining, the types of people -- Halliday's favorites -- who see the secrets of the universe in a bubble gum wrapper. 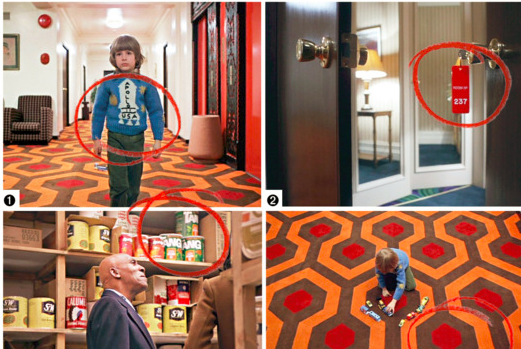 There are many esoteric readings and messages fans have found in The Shining, from the evidence that Kubrick faked the moon landing (referenced by another Kubrick devotee, Christopher Nolan, in Interstellar), to the far more believable one that the Overlook Hotel is a microcosm of a damned America, built upon the same murderous horrors and genocides of the nightmare of American history, condemned to live among the ghosts of her original sins. At the same time, it is a story about a writer -- a creator -- (Jack Nicholson's Jack Torrence) who loses his mind, and in a frighteningly persuasive reading, sexually abuses his son. Spielberg himself has always been focused on (even obsessed with) father-son relationships in his films (and often shows fathers who are either absent or disengaged), but in The Shining his lifelong themes are expressed in their ultimate Hellish form, the supreme perversion of the father-son relationship. It is also the shadow that has always, if faintly and without real evidence in fact, followed this Peter Pan-loving director who seems almost too imaginative, childlike, and good with child actors to be completely benign. They are the dark suspicions which follow such men in our cynical society in which fratty man-boys may reign, but ostentatious adult innocence is considered freakish and even criminal. Spielberg may be known as the filmmaker of wonder and awe -- but the director of Jaws, like most great artists, likes to peer into the terrible abyss, too. But how far? 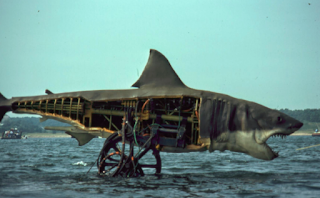 The set of The Shining was next to the set of Raiders of the Lost Ark, and it was where Spielberg and Kubrick first met and formed a bond, to the point that Spielberg finished Kubrick's "A.I." after he suddenly died after a screening of Eyes Wide Shut (we won't go into that). Spielberg has confessed to not liking The Shining upon first viewing, and only after multiple watches did he realize it was a masterpiece. Indeed, as Room 237 attests, the film casts a spell, and Spielberg is not the only creative type to have been spellbound by Stanley. 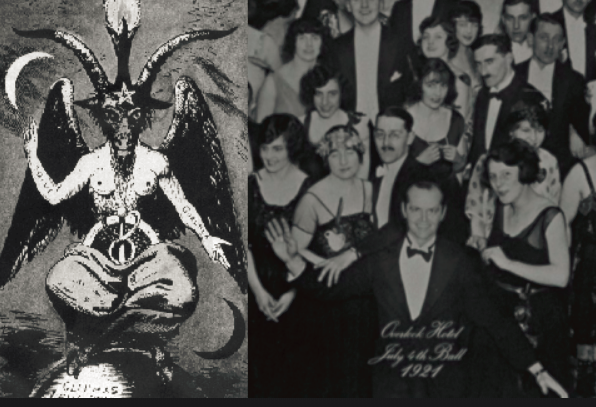 The introspective identification with the dark side of creation becomes clear when we see the famous ending "snapshot" of Nicholson's character at the July 4th Ball, grinning like the devil -- only in Ready Player One, he is replaced by Spielberg stand-in James Halliday, the digital diety whose game is being played by the entrapped and enraptured world.  And indeed, we have more evidence for the Inferno journey associations as it becomes clear that the second key is about Halliday's regrets at not pursuing a woman he had one date with, and was in love with thereafter -- a modern Dante chasing an idealized Beatrice, elevating a human woman to something divine in his imagination (a bit like Wade elevates his Beatrice, Artemis, to divinity by falling in love with her digital avatar).

Ready Player One is a film Dana Stevens calls a "representative of evil." It is a film with an A- audience cinemascore, a mass approval which Verge culture editor Laura Hudson calls an "indictment of the culture." And yet, Ready Player One IS the culture -- and through it, Steven Spielberg serves as a neo-Dante Alighieri, exploring the frozen Hell of pop culture nostalgia he helped create, and which chains us to an idealized past which we continually beg to re-experience:  Make movies great again, like when we were young.

Fun and even moving, "problematic" and uneven, and certainly not one of his best movies, the ambitious cinematic sequence trapped within this virtual reality spectacle is still one of the most fascinating creations in Spielberg's long career. This film is well worth probing further, and reading into, as a culmination, a celebration, an apology, and a plea to successors yet unknown: take us forward, create something new, and snap us out of the spell of the Spielbergian demiurge.