Allison Janney is not above traditional Hollywood flattery to win roles -- a favorite go-to line in interviews is "I didn't even read the script before saying yes" (because so-and-so is sooo talented), but more importantly, she can play any role and rise to any occasion, from the depths of depressed to fantastic comedic highs.  She is one of the great chameleons. 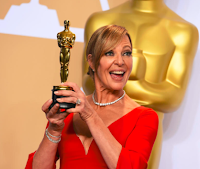 It was a long journey from her feature film debut as "Lady Cop" in the unintentionally homoerotic flop masterpiece Cowboy Way to the credit she shall have from now on: Academy Award Winner Allison Janney. In the young 21st century, she has been the Meryl Streep of television, winning 6 Emmy awards for acting (creeping in on Cloris Leachman's record of 8), but achieving industry recognition in films (as well as being cast to her full potential) has taken longer. Since 1994, outside of her defining television roles on The West Wing and now Mom, she has had dozens of cameo and supporting roles in films both great and horrible, making the most of small parts, and making an impression on audiences and filmmakers alike.

I cannot claim to have seen all of Allison's films (I count at least 60 feature film roles), but I have seen many, and for the rest, I have found clips. After much research, angst, and deliberation: Here are Allison Janney's top 12 movie roles for which she did not win an Oscar.

Renee Zellweger is a revelation as the sweetly innocent, traumatized title character on a misguided quest for the soap opera Doctor she believes to be her ex-boyfriend, but Janney is excellent as she turns what could have been a forgettable part into a memorably jaded, sophisticated, power-mad writer-producer of the soap "A Reason to Love" who effectively serves as Zellweger's opposite.  Her frequent bursts of cynical laughter at Zellweger's delusions are pure sardonic Janney, and her character represents an entire culture that often forgets the power of the stories they put out into the world. She also looks fabulous, but doesn't she always.

As the intimidating mother of Emma Stone's character, her best-known line is likely "get your raggedy ass off my porch," and while a memorable character, her best scenes fell to the cutting room floor. And according to Stone, she was even funnier in deleted footage. After the director dared Janney to make them laugh while shooting a cutscene in which she learns her daughter's boyfriend is the son of a prominent southern senator, she ad-libs: "Well, Senator Whitworth? He f*cked me silly after Ole Miss won the Sugar Bowl!"

If only Tennessee Williams were alive to do a show starring Janney on HBO.

This recent Netflix movie is not, to my great disappointment, a biopic of Tallulah Bankhead starring Allison Janney -- we live in the worst timeline, remember -- but it is still a great part.  Ellen Page plays the title character, a vagrant hippie abandoned by her boyfriend, and Allison Janney is Margo, the mother of Tallulah's boyfriend who is going through a messy divorce. After Tallulah essentially kidnaps a toddler from a delinquent mother, she panics and brings her to Janney claiming it is her son's baby -- and thus Margo's granddaughter.

As Margo, Janney plays a woman abandoned by her husband for another man. She conveys the loneliness and pain that, in our "ra ra come out of the closet" times, can so often downplay the casualties of a gay man's late in life awakening. In "Tallulah," we watch Janney on a painful journey toward letting go. In the magical last scene, Janney floats better than Bullock in Gravity.

A primary reason Janney got the chance to secure her multiple Emmy-winning role on The West Wing was by making an impression on Aaron Sorkin in her bit role as a clumsy librarian who sleeps with Travolta's Bill Clinton-esque character in Primary Colors. The part where she does a walk-and-talk with Travolta and then falls down the stairs is Janney at her Lucille Ball best, and directly inspired her introduction on The West Wing, where she famously flies off the treadmill, and later, into the pool.

Allison Janney, always a peach, and now, at long last, a star, was perfectly cast as the excitable Peach the Starfish one of Pixar's greatest films. She's a hoot and a half as a character who stands in for all of us, attached to a glass screen and spending her life mumbling/screaming commentary on the neverending show of other people enduring pain (in Peach's case, of dentistry). She also has great chemistry with Willem Dafoe's Gill.  When she yells "THE TANK IS CLEAN!?!?!" she goes the Full Janney, and it works.

Her role in this Ang Lee 70s period drama is essentially a cameo, but it is a memorable one. As the enthusiastic host of the pivotal "key party" in the film, in nearly clownish makeup and black-and-white stripes (see the photo at the top of this post), she is unforgettable. I'd drop my key in her jar, that's for sure.

Listen to Janney describe Ang Lee's critical director's note for her perceived "overacting" of the moment when she opens the door in welcome ("I was just doing my mother!"), now a highlight of the film. Trust your instincts. Janney did.

Another dramedy about a boy coming of age, Allison Janney plays "gregarious, hard-drinking Betty," the neighbor at the beach house. A somewhat similar role to the hilarious child-insulting mother in the otherwise twee Away We Go, here she plays another character (as in Tallulah) who was recently left by a gay husband ("Not a shock! Let's just say in bed his favorite view was the back of my head."). An open book of a character, drunk most of the time, Janney is a riot -- but manages to move us, too, with her barely concealed pain.

This Josh Radnor dramedy's best scene is after he sleeps with his old teacher, played by Janney. As Judith Fairfield, she is the ironic "Romantics" professor who has not just given up on romance, she's given up on humanity -- and means it. Jaded, grizzled, cynical, bitter, cutting, and cruel, the hard shell of mean Janney creates here foreshadowed all she would bring to her Oscar-winning role in I, Tonya.  Josh Radnor's screenplay is overwritten (he literally explains the irony) but Janney makes it work. Watch the scene:

Somehow, Janney brings the mood of The Hours to the dark comedy of American Beauty, as the nearly catatonically depressed Barbara Fitts -- who turns out to be another neglected wife of a closeted gay man. In scene after scene, she is a background character, barely able to speak and apologizing when she does, going through the motions of mother and housewife, an empty shell of a woman seemingly far beyond hope. It is a performance difficult to watch for its Kafka-esque journey from initial scenes in which she puts on a good face, to later ones in which she is almost completely immobile, sputtering her motherly lines out of context, devoid of meaning. Understated next to showier performances and yet unforgettable, Allison Janney is one reason this film won the Academy Award for best picture of the year. 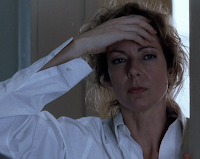 The Hours is one of the greatest Oscar-bait films of the aughts (and my personal favorite of the type), and Meryl Streep, Julianne Moore, and Nicole Kidman are all phenomenal. But Allison Janney, as Meryl Streep's partner (or, later, "my friend") Sally, does so much with so little screen time. We don't know much about her character, but in an initial scene of her walking home in a scarlet jacket, just something about Allison's demeanor tells us it is a cheater's walk of shame, and as we watch her sneak home and slide into bed beside Meryl, we realize it's true. Her performance is most famous for the kiss with Meryl, a scene I just rewatched in the context of the film, a layered, cut-onion of a sequence which never fails to bring tears. But it is the little things which shine as well, simply the way she looks at Meryl's character, a mixture of worry, distance, and genuine, bumbling affection that reveals complicated depths of feeling and yearning for intimacy which are never truly put into words. Early on, during party prep, when she sees live sea creatures (ambassadors from the abyss...) undulating in the sink and mutters "Oh my God...What if nobody comes?!" she injects a rare moment of humor in a film otherwise submerged in depression. She always finds a way to give a film what it needs. 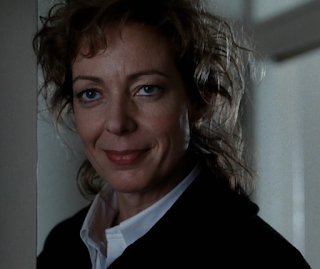 Rarely has an actor shown as much range on film in one year as Allison Janney in 1999, in which she played both the deeply depressed Barbara Fitts in American Beauty as well as the ebullient, dirty, and cynical guidance counselor in 10 Things I Hate About You. And transcending both roles was a brilliant turn in the otherwise hilarious but uneven Drop Dead Gorgeous, a mockumentary about a small town beauty pageant in which she plays, quoting Susan Wloszcyna, "tacky incarnate" as Loretta, Minnesota trailer park goddess.

A film more appreciated now than in its own time, in which it was unfavorably compared to the similarly-accented Fargo, the comedy is pitch-black, wickedly fun, and actually written by a Minnesota beauty pageant survivor. Janney's performance is perhaps the peak Janney-laugh on film (on television, of course, it is this scene), and as the neighbor-friend who has faith in her friend's daughter and tries to imbue her with a competitive drive to win (a kinder version of her Oscar-winning role), she injects genuine feeling into a film full of manic comic energy. In most of these movies Janney blends in and serves the film -- here she triumphs over a difficult to execute script with an iconic and very human comic performance. For that, it's my number one.