When the mood for adventure happens to strike, I shall, from time to time, venture away from my favorite boutique art film cinema and join movie-going throngs at the Chinatown Regal megaplex, where one can select from a variety of extravagantly funded films about men and women in tight-fitting suits who fight a lot.


When I do this, despite having occasional high hopes for the latest offering to our modern American mythological canon, and also looking forward, admittedly, to the tight-fitting suits, I almost always regret it. But I have never regretted a movie-going decision more than experiencing the otherwise laudable superhero movie Black Panther in something called "4DX," which quite honestly I did not know existed until I purchased the insanely priced ticket.

What is "4DX?" It is a combination of a 3D film with "physical effects" like water spraying, air bursts, tickling, seat-shaking or vibrating, supposed "smells," temperature changes, and whatever else wicked imaginations can conceive.  It is, in effect, an amusement park ride, one which transforms what could be a great work of cinema into mere entertainment. It's not just for people who go to movies because otherwise, they'd be bored -- it's for philistines who find themselves generally bored by movies.

When you enter the 4DX theater one might be momentarily thrilled to find a roomy, comfortable chair, one of the more inviting movie theater seats around. Do not be fooled: this is an electric chair, and you are about to be fried alive.

There is no seat-belt, although I would later wish for one. My first act was sneaky and one I often do when I see films alone: given these were reserved seats, and I hoped to take notes during the movie (as well as avoid the chance that a loud chewer would plop down next to me), I went online on my phone and selected the seats next to mine on either side to purchase, and then waited at the checkout screen. Whether this plan worked, I smelled bad (I smelled lovely), or I just got lucky, no one sat next to me. Which was for everyone's safety, because shortly my writing pen would go flying. Like in the air.

Like relationships with many abusers, the seduction phase was enjoyable, and continued as the film began, giving one false hope that we were in safe hands in that theater. The opening of Black Panther is a gorgeous purple-hued sequence narrating the history of the grand fictional African kingdom of Wakanda. As the camera swooped across the skies, the seats moved as well, giving one the impression of flying. It was lovely! It was also a short-lived euphoria.


Soon we were in an action chase scene, and while I would love to give details I was honestly too shaken to comprehend fully what was happening. In 4D, it is not enough to feel the bumps as a truck drives through the jungle as bullets wizzz by, you have to experience the gunshots! Shockingly, as characters are shot at on screen, air bursts at your head mimic bullets either whizzing by or, this couldn't have happened but it did, blasting into your skull. Fun!  No, really, the rest of the theater squealed in delight. I'm the weirdo who doesn't enjoy feeling like JFK in the limo while at a movie. God Bless America.

After this chase scene, I thought that perhaps we would return to the glorious swooping camera pans of Wakanda, and this nasty being shot in the head business could be forgotten about. Unfortunately, no. The King was dead, and to find a new King, our star hero needed to fight a challenger on a glorious waterfall precipice. Thanks to 4DX, I could feel every punch. Later, there would be ANOTHER fight. By the end, when (I will not spoil) a character is defeated and thrown off the water's edge, as I was sprayed in the face (I was relieved for a spritz, honestly), I hoped it was the end. I felt dead too. But no. The movie was just ramping up.


There were more fights to come. There were also smells, which, I imagine were supposed to range from the strange purple flora of Wakanda to delicious feasts to jungle rain, but which in effect all smelled like a soldering iron. If you've never smelled a soldering iron, it smells like cancer.

I'm trying to check my notes now, to remember what else happened, but they look like a seismograph reading. Still, while most of the scribbling seem to be complaints about being beaten up by a movie theater, they do reveal some other observations. 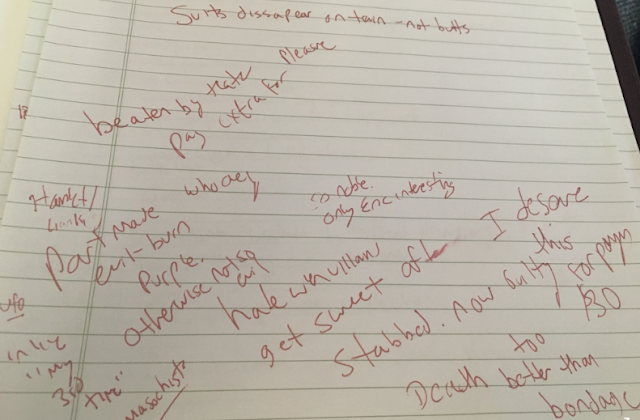 I have several notes about how fascinating, real, and well played the "villain" is, Michael B. Jordan's "Erik," who unlike Chadwick Boseman's title character, doesn't think Wakanda should hide and enjoy their comforts, but to actively fight those oppressing Africans worldwide. When he, SPOILER, becomes king (an unsettling development, especially when we experience the shamanic awakening again, only this time for someone not spiritually prepared for leadership), his motivations are both believable and attractive, to the point that I was genuinely torn. If not for a few moments in which his character did something truly evil, (truly, "a heart so full of hatred is not fit to be a king" -- as we can see in the real world at the moment) it could be much more difficult to decide between good and bad in this movie.

That said, if Ryan Coogler's direction and Lupita, Angela, Sterling, and other's performances were all Quite Good, (particularly for a superhero film, which can be difficult to make as politically charged, interesting, spiritual, and artistic as Coogler achieved with Black Panther), my 4DX experience was Very Very Bad. And I had a few quibbles for the film itself. Perhaps the most important was the fight on the train tracks between Erik and Black Panther. Because of some techno-babble thingy interaction whachtamacallit, their tight suits began to splotch in places, revealing their skin as they grappled. It was pretty homoerotic, and for a moment I forgot I was being constantly assaulted by my chair with each punch, but (as you can see in my top note), homophobia reared its face again, as not a SINGLE splotch of skin was revealed on either of the character's butts. How silly, the splotching was clearly meant to be random. But it wasn't. Truly a missed opportunity, which I would like to hear addressed in the Blu-ray commentary.


The other quibble with the film is one that often plagues the Superhero genre: the villains are far more interesting than the main heroes.  It's great that T'Challa is so noble as Black Panther, and his moments of doubt over what is the right thing to do is sort of interesting, but it doesn't make for a fascinating character (although he is a culturally important one).  Of course, Superman isn't that fascinating compared to Lois Lane, and even Batman was a bit of a slog compared to characters like The Joker and Catwoman. I thought Gal Gadot's Wonder Woman was genuinely complicated, in her combination of warrior bravado and Amy Adams Enchanted-like naivete. Still, most of the time, the Superheroes themselves are good guys with powers doing good guy things, and this is no different. The villain usually makes the Superhero movie, and he does so here.


What is different about this film is how far it goes, as a big budget high stake$ movie, in debating issues of the Black experience, and how it does so from a Black perspective.  Martin Freeman's "white guy" sidekick, a CIA agent, plays an inverse of the "token Black guy" character from all those white-dominated action and Superhero films where Black roles only served the story arcs of the Caucasian characters. This is the Superhero film done right, a very good and beautiful one that Black audiences deserved long ago, and that audiences have enjoyed in record numbers. It will, hopefully, help catalyze the Hollywood movement toward not only telling the stories from all American perspectives, but doing so in huge tent-pole franchises like this one, no matter how much I may disagree with how much is spent on Superhero films in general, compared to films I prefer.

As for 4DX, well, as a great curmudgeonly writer once put it, that is a Supposedly Fun Thing I'll Never Do Again.

I will, of course, try anything once.

4DX: Negative 5 Stars. I tried a Cricket Taco once. I would rather eat five more than step into a 4DX money-trap nausea machine ever again.