One of the few things more captivating than watching Meryl Streep embody a pioneering woman with a zest for life is watching Meryl Streep make an impossible decision on screen. In Steven Spielberg’s triumphant and timely newspaper thriller The Post, Streep as Kay Graham does both, and the result is one of the most Meryl performances of all time. 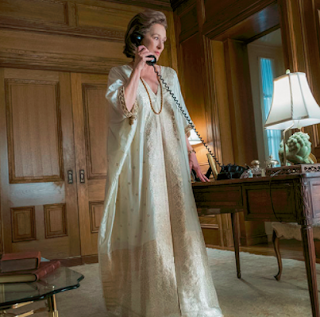 In Graham, Streep digs into a role that is something like “Julia Child plays Margaret Thatcher and makes Sophie’s Choice to save the republic.” In fact, the part is so Streepian it is nearly pastiche, and one can hear the ghosts of previous characters in Graham’s difficult to place accent – a Child-like guffaw hosting a social event, a low Thatcherite steadiness, even moments of her Ethel Rosenberg, perhaps from Graham’s Jewish New York roots.

In the climax, in which Graham stands in Gloriana in her Ann Roth-designed Caftan, frantically worried male advisors sniping in her ear, and decides whether to risk her legacy, DC establishment relationships, money, and freedom to defy a vindictive President and publish the Pentagon Papers, it is as if all the Meryl Streep Movie Decisions were distilled into one piercing moment. In this near death experience, Streep's life on screen flashes before our minds eye, a parade of impossible choices she has made for the modern woman: leaving her family to find herself, giving her daughter to the Nazis to save her son, whether to leave her husband’s car in Bridges of Madison County, choosing between Alec Baldwin and Steve Martin (perhaps not so complicated, that one). But whereas all these decisions were forced by or related almost entirely to men, in The Post the men are ultimately gnats buzzing around her ear, as all the power to choose, and the consequences which shall result, rests with and will be endured by her. As Sarah Paulson explains to Tom Hanks’s adventurous, perhaps reckless, Ben Bradlee (and to the audience), Graham has everything to lose in deciding to publish, and she does it anyway, “and I think that is brave.” At last, after her key role being cut out of All the President's Men, Graham receives her due in bringing down Nixon.

Hanks is good in a role that's been done well before, and Spielberg is compellingly in control – the screen fetish for 70s telephones is a treat, and the gravity and adventurous nobility he grants to the always vulnerable newspaper business is the best kind of nostalgia. But this is Streep’s film, an ascension to yet another level in her thrilling and complicated career, and everything that career has meant and continues to mean for women everywhere. From the moment she overcame Hollywood misogyny (too ugly! Slapped by Dustin Hoffman!), wrote her own testimony as Joanna Kramer and won her first Oscar, to her pitch-perfect 2017 Golden Globes speech standing up the vindictive bullying of Donald Trump, to the current blowback for her inevitable ties to the establishment, Meryl Streep has become a woman just as pioneering and complex as the historical figures she plays on screen, and in her portrayal of Katharine Graham, rarely has actress and role fused so beautifully into one.

When, through tears, Kay Graham agrees to put it all on the line on behalf of the first amendment, she speaks from a voice which emerges from within, overpowering the tinny male hectoring in her ear. The voice emerges small at first, growing in confidence like Molly Boom's soliloquy of orgasmic acquiesence: Yes, yes, yes, I will publish, yes. She takes the leap, and on behalf of women everywhere, despite her flaws and despite her fears, she leads.  Four and a half Stars. ****1/2