Film Review: Call Me By Your Name

If Milk is a proudly gay movie, Call Me By Your Name is, like archetype-inverting Brokeback Mountain, a decidedly queer one, which is something a bit different. This is not only because the two men flirt and even have sex with women as well as each other, or because of its skepticism of marriage, or because it is set in a semi-fantastical realm outside the political struggle for gay rights, but because the characters are always reading. In fact, if we take queer to mean, in part, against the mainstream, in today's illiterate society all the reading in this film is almost queerer than the sex between two men. 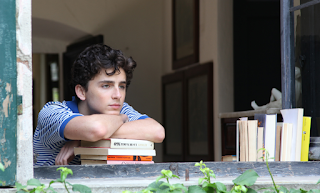 This is a same sex romance the gay-label rejecting writer Gore Vidal might have appreciated, as it is set in Italy, drenched in the classical past, and in love with words. And whatever you think of Vidal's viewpoint, this film's simple and emotionally shattering earnestness surpasses Vidal’s inherent bitterness about love and discovers far more painful truths.  This movie, about intimacy, openness, the sensual blossoming of youth and the ever-encroaching numbness of modern adulthood, is sentimental in the most earned and expensive sense, and when it aims for the deepest recesses of the heart, as it does during Michael  Stuhlbarg’s devastating father to son monologue, it does not miss.

Armie Hammer, a classical statue come to life, is handsome as ever in his latest “star-making” role, shimmering but still outshone, this time by co-star Timothée Chalamet, who delivers a performance the Oscars were created to honor. The final moments, in which Chalamet both bears the full emotional weight of the film and causes us, simply by staring into the camera, to feel it with him, is the most moving ending of a film romance in recent memory.