Star Wars, the saga set a long time ago in a galaxy far far away, may seem the ultimate escapist movie series. And yet, in a year in which audiences are craving escape from the real world, Rian Johnson’s “The Last Jedi” does something unexpected - it insists there is no escape, not just for the characters on screen, but the audience beholding it.  Like Rey during her force training, the audience enters the dark cave of the theater to see their own 2017 predicament mirrored before them: fears must be faced, the dark side must be resisted, and if men are to have any hope, it is through listening to women, and doing what they're told. 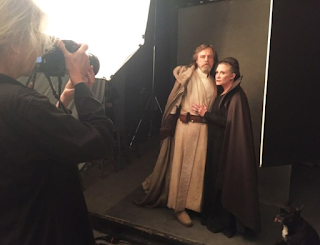 One can see how a bro backlash could brew from such themes, but add Johnson’s risky slaughter of sacred cows to the stew and a mixed reaction was perhaps inevitable. This is a film in which (spoilers) Luke Skywalker is isolated and cynical, is revealed to have almost killed his sleeping nephew, and is easily bested by *gasp* a “girl” in a lightsaber duel. It is a film in which the ghost of Yoda returns to burn down the past which so many of us cling to still, all to illustrate a lesson on the value of failure. It is a film in which the late Carrie Fisher’s General Leia Organa is revealed — in a surreal and utterly fabulous scene of death and resurrection — to have access to the Force. At least, that’s how many interpreted her near death space flight. Some male fanboys saw the moment as Luke using his force powers Harry Potter-like, to save his squib sister from the other side of the galaxy.  Perhaps the truth is often subjective, but in this case: fuck off, fanboys, it's her last movie and Leia’s found the Force at last. 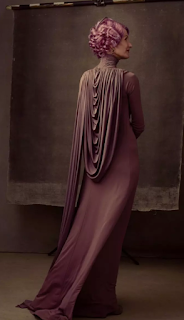 Astoundingly, the audacity of many of these directorial risks pay off, and this is, by my lights, the greatest Star Wars film ever made about the Force.  We are a long way from the nadir of the George Lucas prequels, where we are told, ridiculously, that the Force is a product of a “midichlorian” count one is born with — that you either have it or you don’t. Instead, in a sequence parallel to Yoda’s training of Luke on Dagobah in “Empire Strikes Back,” we are treated to Luke’s mystical description of the Force as a invisible connection between all things, which one can meditate upon and access via a sort of Buddhist enlightenment. And while reluctant teacher Luke emphasizes the light and warns against the darkness, his mentee Rey is immediately drawn to the dark, entering the Hellmouth on the island and falling into another surreal scene in which she faces the black mirror of the theater-cave and confronts the pressing question of her own identity and parentage.  We expect a big answer —  in the parallel episode from the original trilogy we famously learned Luke’s father was Darth Vader — but later in this film, daringly and brilliantly, Adam Driver’s Kylo-Ren causes Rey to remember the disappointing truth, that her parents were “nobodies” - that she was born of nothing: the ultimate "dark father."  If the Force was once closer to a metaphor for Bloodlines and Royalty, and Princess Leia and Luke of Force-Royal blood, this revelation is radical — Rey is a “nothing” commoner who seeks the crown, and in doing so implies everyone has access to the Force’s secrets if they seek it, not just a select genetic few. 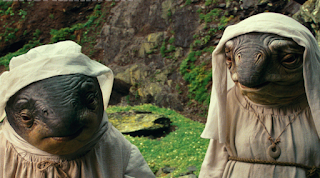 This film, which at times risks jokes too corny and creatures too cute, goes gloriously further with the Force, thrillingly following its established rules to the ends of its own logic. Time and space are collapsed as characters communicate via telepathy across vast distances and the rebel force discovers not even lightspeed offers escape from the seemingly All Seeing Eye of the First Order. In so doing, the film is more dreamlike and less constrained by what we still misunderstand as the laws of physics than any Star Wars film before it.  For some this will take them out of the movie as they nitpick the mechanics of lightspeed tracking mechanisms, but anyone willing to suspend disbelief is in for a treat: as a result of this fever-dream magic, everything becomes about the psychology of the characters, the battles within the soul between light and dark, courage and fear, love and hate. And because of this collapse of time and space, our characters learn there is no escape from the battle before them. Finn, seeing the rebel situation as hopeless, mimics his desertion of the Stormtroopers in “Force Awakens” with his attempt to desert the rebels — but he is stopped by a lucky encounter with the determined Rose (and her crescent moon necklace — part of the “Space jewelry” recommended to the director by Carrie Fisher — which symbolically keeps hope alive by reflecting the light of the absent sun).  Luke has hermited himself on an island in the farthest reaches of the galaxy, his sense of purpose destroyed by his nephew/mentee’s turn to the dark side — but he is called to adventure, once again, by the determined Rey (of hope), who demands to be trained in the ways of the Force. Even the neutral casino capitalists on Canto Bite, who sell weapons to the light and dark sides alike, suffer the destruction of war as Finn and Rose crash their racing creatures through the city, on the search for a code-breaker to help save the rebels. No one escapes the showdown between light and dark, the Force demands a reckoning, and in this delicate balance everyone is forced to take sides eventually — even if, as the Codebreaker thief justifies to himself, selling out the rebels is “just business.” Every choice in this film is a test of courage, like a surreal fever dream mirage with no actual blood, just a setting meant to test one's mettle and one's soul. And in Carrie Fisher's outer space transcendence of her real life mortality,  we touch upon an ever possible truth: that the death we all fear is an illusion, the void we face and re-emerge from, glitteringly alive with the power to fly. 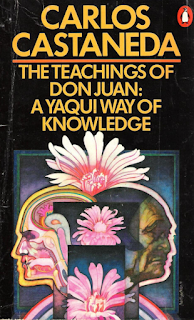 The secret sauce of Star Wars is that it is fundamentally a story about an initiation into secret spiritual truths. Without this foundation, all of the space battles, light saber duels, character identity reveals, special effects, and space politics would be little more than blockbuster nonsense.  But with it, the stakes of everything are profound, every battle and decision is infused with meaning:  an epic confrontation between good and evil, love and fear, as the heroes and the villains seek redemption and search for the secrets of the universe. Many know that George Lucas was deeply influenced by Joseph Campbell’s mythological study “The Hero with a Thousand Faces,” but less are aware that a prime influence for Yoda and the Jedi training was Carlos Castenada’s “The Teachings of Don Juan,” and “The Last Jedi” understands that Star Wars works best when it is focused on the mysterious relationship between a sorcerer and her apprentice. With Luke training Rey in the ways of the Force, Rose teaching Finn the power of love over hate, and Leia and Laura Dern’s Holdo guiding Poe away from destructive machismo toward true leadership, the film becomes, essentially, Castaneda in Outer Space. No Star Wars film before has reached this far philosophically and spiritually, and like the characters, Johnson is clearly attempting to outgrow the master (Lucas himself) by seriously grappling with the implications of the Force. We are made uncomfortable by this film, our nostalgic attachments are challenged, and we are asked to accept a Star Wars born anew, infused now, like Leia herself, with a divine feminine power and a mature definition of heroism. 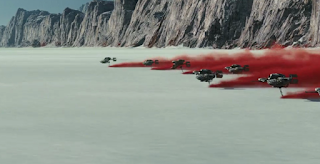 This is a long but rollicking movie and also a gorgeous film, and if green was the defining color of its predecessor this adventure is drenched in crimson. In the final Hoth-reminiscent battle in which scrappy rebel ships scrape the reddish salt, it appears as if the snow is splattered with all the blood ever spilt in this deadly series but never shown on screen (perhaps the light sabers sutured the wounds).  As a result we see the stakes and understand all which has been lost, but because we care about many of the characters, we also deeply feel them.  Not everything works here, but the parts that do transcend the flaws, and when Laura Dern’s lightspeed sacrifice is rendered realistically in silence, goosebumps fill the theater.  This is an ambitious film with great moments, as fitting an unexpected farewell to Carrie Fisher as could be reasonably hoped for, and the most satisfying Star Wars adventure since the 1980s. 4 stars out of 5 **** 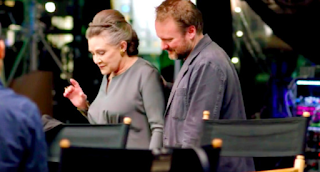