Film Review: Fantastic Beasts and Where to Find Them 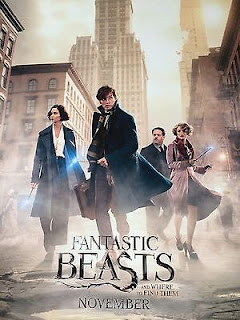 The wise imagination of JK Rowling is one of the living treasures of the western world, and her magical and ever-growing Potter universe is the supreme fantasy creation of our time. Within that context, this Rowling-penned film’s 1920s magical New York expansion of that universe is a magnificent accomplishment – albeit one of world and character-building rather than plot, which is as scrawny as the film's star.

Ah, but a star he is -- Eddie Redmayne performs his protagonist, “Fantastic Beasts” collector (and Hogwarts textbook author) Newt Scamander, with Streepian attention to detail.  Newt, combining the looks and animal-love of Prince Harry with the coy, soft-spoken magnetism of Jackie Kennedy, reads as perhaps on the autism spectrum, and is ambivalent toward human society in favor of his dangerous and charming beasts – and it is his decidedly anti-heroic carelessness that releases his little monsters across Manhattan, inciting the action. Throughout the story, as characters (some, like Alison Sudol’s Queenie Goldstein, glow with excellence; others merely flicker) assemble to re-capture the beasts and uncover a mystery involving the rise of a dark wizard, Newt maintains his deepest attention and affinity with his animals, even as they injure human beings, a consequence to which, like a Zack Snyder Superman, he remains eerily indifferent.  In one glorious sequence, we enter Newt’s magic suitcase as he introduces his friend, the charming and funny Dan Folger as Jacob, to his bestiary, proudly showing off their beauty, diversity, and deadly fierceness.  One such beast, a Phoenix-like creature called a “Thunderbird,” Newt explains, was found in Egypt, taken to England, and is now on its way to the Western United States.  Here, Rowling is signaling more than just fantastical fun – she’s hinting at deep esoteric meanings in these strange beings, just as the entire “magical” Potter-parallel universe serves as a mythological reflection of our non-magical world. 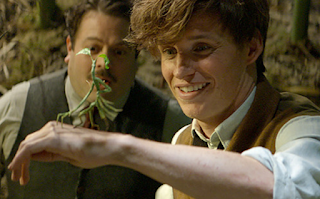 Let us take this further, because we are here, and because we can: this “Thunderbird,” which plays a major role in the plot’s resolution, is certainly more than just a beast – it is, like the earthly Eagle counterpart, the embodiment of a superpower's terrible beauty and awesome might – think Babylon, Britannia, and the Bomb – a mantle of worldwide responsibility handed over to adolescent, pre-war America, an ancient gift by way of her mother country.  This is the fun of such fantasy: it manifests the invisible part of the past, and allows us to see the soul of a nation in these fantastic beasts, as we meditate on meanings within events and myths within history.  Rowling – like Tolkien and Lewis before her – knows the strange power of her own narrative magic to enchant our dry textbook chronicles as well as our everyday lives. 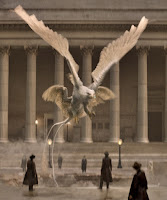 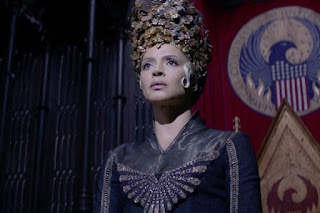 This first film, then, is a flawed work of wonder, and the plot -- thin but pleasantly reminiscent of Jurassic Park -- promises to improve upon future installments, which shall explore another morally complex situation: the Potter-teased story of Albus Dumbledore’s dangerous gay romance with the evil wizard Grindelwald.  The casting, for the most part, is inspired – apart from the unfortunate misstep of casting a rather green-seeming actress (Carmen Ejogo) for the magical American president, who fails to convey the gravitas a Viola Davis or Angela Basset would have brought to the role.  Still, these are small quibbles, and for the most part the film is a lovely start to a series, and if the first “Potter” is any indication, is merely a piece of a whole which promises to be much, much greater than the sum of its parts.